Salami is a type of cured sausage consisting of fermented & air dried meat, mostly chicken, beef or pork. Sausages are fresh, raw, unaged, and have few preservatives. Sausage is made of ground meat which is combined with fat, flavorings, and preservatives, and then stuffed into a casing and twisted at intervals to make links. 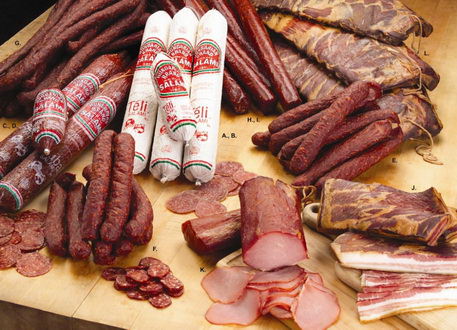 CASINGS – The intestines of sheep , hog ,cattle according to their required diameter .

FORCE MEAT- Pork is used as a basic ingredients for force meat stuffing .Pork is minced , ground , chopped or diced into what is called ” Force Meat “. Every force meat had some binders such as rice , potatoes , panada ,fat , rusk , farina ( potato flour ) which holds the meat .

In this mixture herbs , spices , nuts and seasonings are added .

Sausages are made from beef, veal, pork, lamb, poultry and wild game, or from any combination of these meats. Sausage making has become a unique blend of old procedures and new scientific, highly-mechanized processes. Traditionally, sausages was formed into a symmetrical shape, but it now can be found in a variety of shapes and sizes to meet consumers’ needs. Many sausage products are vacuum packed, freshness dated and 100% edible.

Sausages can be classified in a variety of ways, but probably the most useful is by how they are processed. Processing methods give sausages easily recognizable characteristics.