The objective of basic A La Carte Table Setup procedure is to ensure that tables are set properly and with all the necessary arrangements that each F&B outlet requires. Tables have to be arranged according to the time of the day and service. (Breakfast, lunch, dinner, buffet style, banquet setting, etc)

No matter what setting is being used, the following procedure must be followed:
– Before collecting all the necessary equipment, staff must check for cleanliness and quality.
– All the chairs are aligned as well as the tables
– *The Molton is set
– *The tablecloth is set
– *The show plate is set 1 cm away from the border and well centered with the chairs
– Large fork is set on the left 1 cm away from the border of the table
– Large knife is set on the right 1 cm away from the border of the table
– The bread plate is set next to the fork well centered; the bread knife can be added now if
desired, it is placed in the far right side of the plate
– The glass is set on the right side, just 1 cm on top of the knife, and well centered
Other styles of settings vary in each outlet.
*Molton and show plates do not apply to all outlets.

An a la carte place setting or cover is set on the table before the customer arrives. As the customers choose the dishes they would like from the a la carte menu, the place setting will be changed or expanded according to the dishes ordered by each guest. Before starting the setting, check if the table cloth setting has been performed correctly and that the chairs are in their correct position.

How to prepare the Basic A La Carte Table Setup

• The napkin is to be placed approximately ½ cm from the edge of the table. It should be in the
centre of the basic a la carte place setting.
• The main course knife – place on the right hand side of the napkin with the knife edge facing to the centre.
• The main course fork – place on the left hand side of the napkin. The space between the knife
and the fork should be
• sufficient for a main course plate to be placed between them.
• The glass – normally a red wine glass is placed approximately 1 cm above the knife. If the
setting includes a second glass such as a white wine glass it is to be placed on the right of the
first glass.
• The cruet sets/Condiments – salt and pepper must be on every table. Other condiments will be with the waiter’s mise en place on his/her service table.
• Place one ashtray on table in a smoking section of the restaurant. Have enough clean ashtrays
on the serving table for the replacement of dirty ones.
• The bread plate with bread knife will be placed on the left side of the fork, with the knife’s edge on the left side.

The range of cutlery used is according to the number of courses and the sequence of cutlery is according to the sequence of courses. But never set more then four sets of cutlery and three glasses. If more cutlery and glasses are necessary they will be set up between the courses.
-A second knife, for example a fish knife, will be placed on the right side of the first knife.
-A second fork will be placed on the left side of the first fork and a little higher.
-Spoons will always be placed on the right side. For soup in a cup use a small soup spoon, soup
served in a soup plate requires a large soup spoon.
-To suit the sequence of courses, the spoon may also be in second position if there is a cold
appetizer served before the soup.
-The dessert cutlery is only set up if there is a dessert ordered in advance. The dessert spoon and fork are set up above the napkins. The fork should be above the spoon until the handle on the left and the spoon with its handle to the right. Before serving dessert the waiter will move these to the ready position on the left and right of the plate.
-For ice creams, mousses or parfaits the set up is a coffee spoon.
-For fresh fruits use a dessert knife and dessert fork. They are placed above the plate with the knifes handle on the right with its edge towards the guest. The forks handle goes on the left below the knife. Before serving dessert, place a finger bowl of cold water (no lemon) on the table. For cheese use the same set up without the finger bowl.
-Several glasses will be set-up as follows; if there are three glasses, the red wine glass will be
above the knife, the water glass obliquely above on the left side and the white wine glass
obliquely, below on the right side. 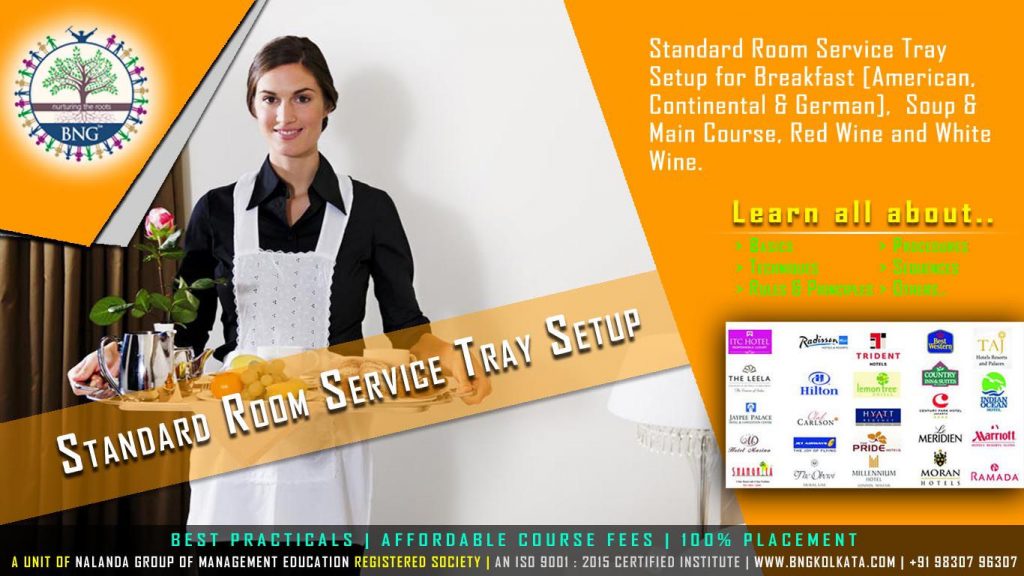