Pork is the meat from the domestic pig (Sus scrofa). It is one of the most commonly consumed meats worldwide. Pork is eaten in various forms, including cooked (as roast pork), cured or smoked (ham, including the Italian Prosciutto) or a combination of these methods (gammon, bacon or Pancetta). It is also a common ingredient of sausages. 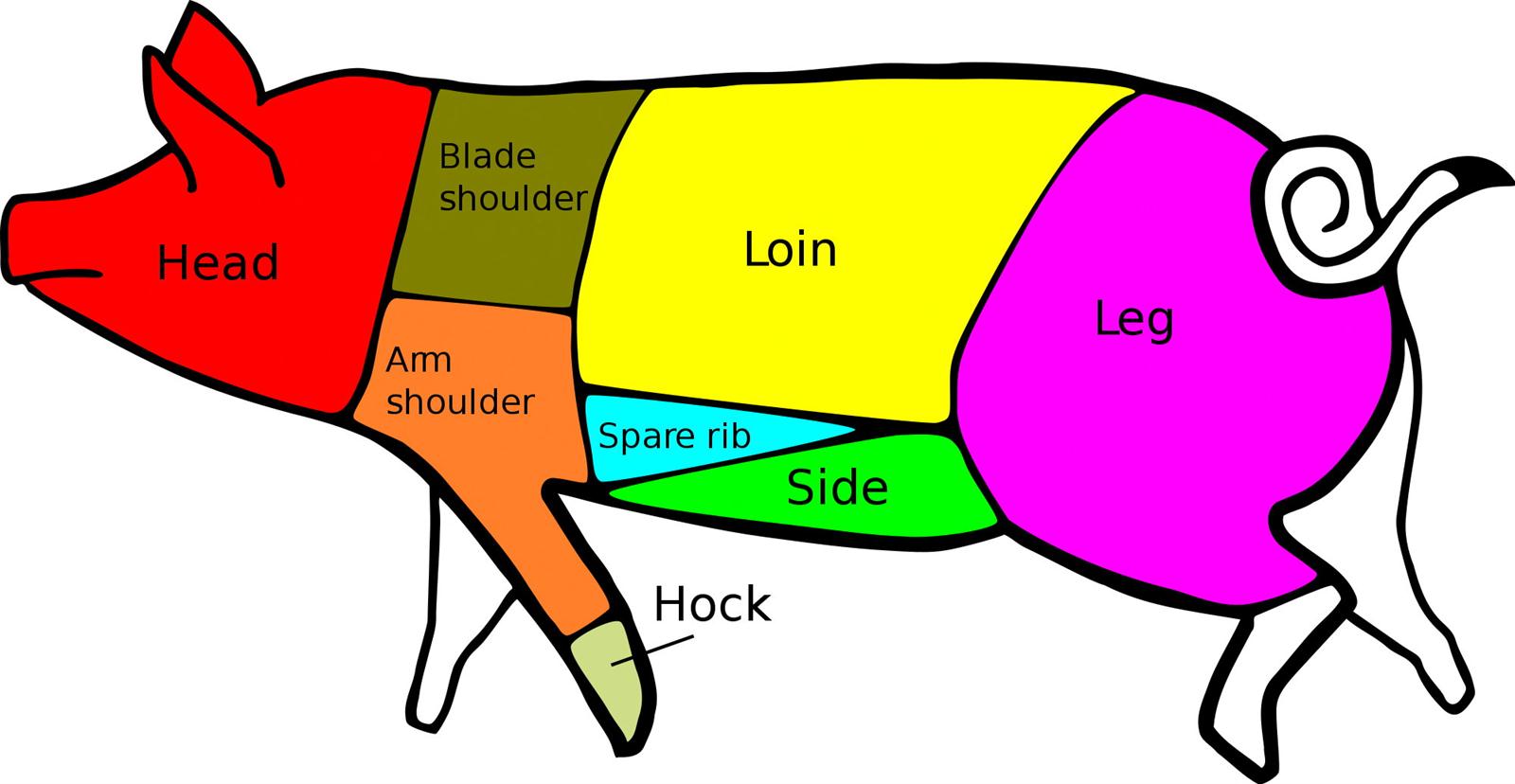 Head: This can be used to make brawn, stocks and soups. After boiling the ears can be fried or baked and eaten separately, which are crunchy due to corliage bones. It is considered a delicacy.

Hand/Arm: This can be cured on the bone to make a ham, or used in sausages.

Loin: This can be cured to give back bacon or Canadian-style bacon. The loin and belly can be cured together to give a side of bacon. The loin can also be divided up into roasts (blade loin roasts, center loin roasts, and sirloin roasts come from the front, center, or rear of the loin), back ribs (also called baby back ribs, or riblets), pork cutlets, and pork chops. A pork loin crown roast is arranged into a circle, either boneless or with rib bones protruding upward as points in a crown.

Belly: The belly, although a fattier meat, can be used forsteaks or diced stir-fry meat. Belly pork may be rolled for roasting or cut for streaky bacon.

Legs/Hams: Although any cut of pork can be cured, technically speaking only the back leg is entitled to be called a ham. Legs and shoulders, when used fresh, are usually cut bone-in for roasting, or leg steaks can be cut from the bone. Three common cuts of the leg include the rump (upper portion), center, and shank (lower portion).

Trotters: Both the front and hind trotters can be cooked and eaten, as can the tail.

Spare rib: These are taken from the pig’s ribs and the meat surrounding the bones.

This is injected into the flesh and then the meat is immersed in a salt solution for 5 days. Some times a combined method is used .Brine is injected into the meat and then it is stacked and covered by dry salt for 2 to 3 weeks .It is then matured for about 3 weeks under controlled temperature .Desirable bacteria act on meat juices. This bacon is now ready to sale as GREEN or PALE bacon.

In certain parts of the world the bacon is preferred smoked .

So it is then hung over smouldering wood dust for 2 days. This extracts excessive moisture and gives the bacon a distinctive flavour , preserving the qualities and act as antiseptic.

Ham: Ham and Gammon comes from the hind legs of a pig. Gammon is cut off the cured porker . Ham on other hand , is cut off at fresh pork stage and includes a substantial part of the loin . It is cured after cutting , usually by the long process of dry salting .