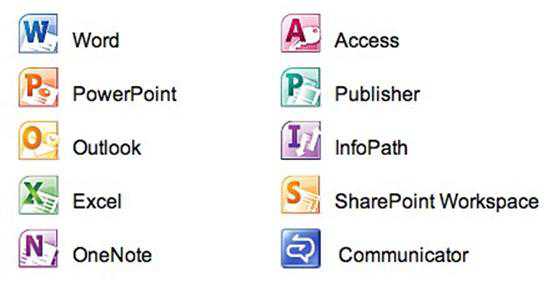 The backbone of office automation is a LAN, which allows users to transfer data, mail and even voice across the network. All office functions, including dictation, typing, filing, copying, fax, Telex, microfilm and records management, telephone and telephone switchboard operations, fall into this category. Office automation was a popular term in the 1970s and 1980s as the desktop computer exploded onto the scene.

The office automation systems, also called OAS for its acronym in English (Office Automation Systems) consist of applications designed to help the daily work of the administration of an organization, are part of this type of software the word processors , the leaves calculation , the editors of presentations , customer email , etc..

When several of these applications are grouped into a single software package for easy distribution and installation, the set is known by the name of office suite .

Perhaps the most popular software package that can fit the definition of OAS (and to the office suite ) is Microsoft Office in all its versions. This software, part of the company Microsoft , officially operates under the operating systems Microsoft Windows and Apple Mac OS , although it does in Linux when using emulators.

Microsoft Office is an office suite of desktop applications, servers and services for Microsoft Windows and OS X operating systems. It was first announced by Bill Gates of Microsoft on 1 August 1988 at COMDEX in Las Vegas. Initially a marketing term for a bundled set of applications, the first version of Office contained Microsoft Word, Microsoft Excel and Microsoft PowerPoint. Over the years, Office applications have grown substantially closer with shared features such as a common spell checker, OLE data integration and Visual Basic for Applications scripting language. Microsoft also positions Office as a development platform for line-of-business software under the Office Business Applications brand.

On 10 July 2012, Softpedia reported that Office is used by over a billion people worldwide.

The current versions are Office 2013 for Windows, released on 11 October 2012

Microsoft Word is a word processor and was previously considered the main program in Office. Its proprietary DOC format is considered a de facto standard, although Word 2007 can also use a new XML-based, Microsoft Office-optimized format called .DOCX, which has been standardized by Ecma International as Office Open XML, and its SP2 update supports PDF and a limited ODF. Word is also available in some editions of Microsoft Works. It is available for the Windows and OS X platforms.

Microsoft Excel is a spreadsheet program that originally competed with the dominant Lotus 1-2-3, and eventually outsold it. It is available for the Windows and OS X platforms.

Microsoft PowerPoint is a presentation program for Windows and OS X. It is used to create slideshows, composed of text, graphics, and other objects, which can be displayed on-screen and shown by the presenter or printed out on transparencies or slides.

Microsoft Outlook (not to be confused with Outlook Express) is a personal information manager.

Notes can be shared with other OneNote users over the Internet or a network.

integrated communications client for conferences and meetings in real time (known as Microsoft Office Communicator in Office 2007, bundled with Professional Plus and Enterprise editions)

project management software to keep track of events and to create network charts and Gantt charts, not bundled in any Office suite