The word game, for culinary purposes, means animals hunted for food. Many of these, such as pheasants, partridges, quails and rabbits, are now reared domestically, yet are still classified as game. The game used in the American kitchen today is divided into two types FEATHERED OR FURRED. 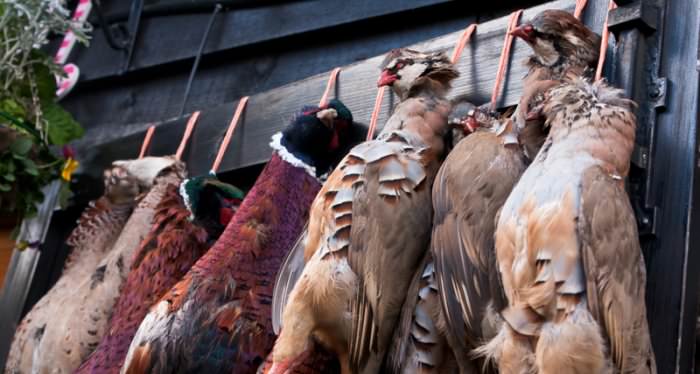 Game is not normally throughly bled. This is the reason it has a noticeably darker coloured muscle tissue than that of slaughtered domestic animals. Game purchased from an inspected source is normally prepared and hung correctly. Remember that we are responsible for the wholesomeness of the product what we serve to the consumer.

Age is the major consideration when selecting game because it determines the method of cooking. Mature game birds have jaws, which are set. If the bird can be lift by its lower jaws without signs of breaking, it is an older bird.

When buying young birds look for clean, soft textured feet, pliable breastbones and round spurs. As birds age the breastbone becomes hard and brittle, breast meat becomes tougher and more solid, and spurs become longer and sharper. Also in young partridges have a pointed feather while in older birds the feather is rounded.

When buying game animals, one have to keep in mind that the ears of the young hares and rabbits split easily and soft textured. Young rabbits and squirrels will be lighter in weight than older ones. In general, younger birds and animals have a better eating quality. The texture will be less tough and stringy. Meat of younger animals and birds is also more moist.

TYPES OF GAME AND PREPARATION METHODS

The games, which are going to, discussed are common in western market. Game is divided into distinct categories: Feathered and furred.

There are two classification geese: young goose and mature or old goose. The young goose may be either sex. Its meat is tender and it has a windpipe, which is easily dented. A mature or old goose may be of either sex. It has tough flesh and a harden windpipe. Goose can be purchased year round. It is available ready to cook, either fresh or frozen. The meat of the goose is sweet, all dark tender and juicy. The popular sizes vary from four to fourteen pounds of ready to cook weight.

To prepare the goose for cooking, the giblets and neck should be removed. If include, from the cavity. If any fat layers are there, it is to be removed. Now the bird is ready to be stuffed and trussed. The trussed goose is placed in a shallow uncovered pan. The goose can be roasted in a 325oF. In a standard oven during roasting the fat should be removed from the pan periodically. This will keep the fat colour light, not too brown. To test doneness the drumstick is turned up and down. The first step in preparing a goose, if it is frozen is to thaw it under refrigeration.

The most famous variety of duck is mallard. It is from this species that all other domesticated varieties of ducks are descended. Other types, which are hunted as game, include teal, widgeon, shoveler, pochard and scaup. These are not meaty birds. They are however considered to be good eating. Wild duck is best prepared by roasting. To roast a wild duck such as mallard or teal, it is best to salt and season the bird’s cavity and under the breast skin 2 hours or more prior to cooking.

To roast the duck lightly oil the duck with olive oil and place it breast down on the base in roasting pan. Cover and bake in a 450oF oven for 25 minutes. Remove the cover from the pan and allow the bird to cook at 400oF for another 30minutes and ready to serve.

Related to the pheasant the partridge is a smaller bird. It is usually considered to have superior eating quality. The name of partridge is often applied to ruffled grouse in United States. In France, Partridge is cooked with cabbage and other vegetables and made into a decorative mold called a “chartreuse”. Preferably young birds are best-roasted and older birds braised or served in casserole.

The pheasant is a pleasing table bird, which has a mild flavour. There is numerous varieties of pheasant throughout the world. Perhaps the most popular of the game birds, pheasant responds well to hanging. Farm-reared birds are sold oven ready, fresh, or frozen.

Pigeon is classified as raised or wild. Raised pigeon has rich dark meat that lends itself well to roasting. It is best in preparations where the breast is served rare and thinly sliced on the plate with sauce. Wild pigeon or dove often tough and strongly flavoured. These birds are best suited to casserole, pie, stewing, or braising.

Quail is a tasty, less expensive alternative to pigeon. Like partridge, quail is related to the pheasant. There are varieties of quail but the California quail and European quail are reared on farms and sold as gourmet items in restaurant.

Woodcock, according to Larousse is considered to be the best winged game bird. Common in France and United States it is recommended that it is not to be hanged for too long.

Songbirds such as airks, thrushes, and warblers are considered gourmet delicacies in Southern Europe. Such small birds are usually barbed with fat and vine leaves and roasted. They may go on a spit fire oven.

Game birds are often served with fried straw potatoes or fried potato pancakes. In England they are served with fried bread crumbs and bread sauce. The French like the birds on a crouton with a thin layer of liver pate. The juices or gravy from game birds may be made into a sauce.

The Roasting Temperatures for Game Birds are as follows: –

The European bear and the American bear are occasionally enjoyed for their steaks, but bear paws are considered to be the prime part. Bear meat has a musty taste and should be marinated for a longer period of time. This is most popular in German and Russian cooking.

The European wild boar, although plentiful on the continent and in some parts of America. Only the meat of the young boar is really tender. The meat of older animals needs to be hung for two to three days before being used. The flesh should be marinated before cooking to tenderize the meat and reduce the strong, gamey flavour. Boar can be roasted, sautéed, or barbecued.

Today the meat of any animal from the deer or cervidae family is called VENISON. The Latin term Venari, meaning to hunt. At one time all game meats were called venison. However unless the animals is very young it needs to be hung and marinated. The haunch is the most popular cut, although the loin and fillets also make good eating. Deer in general are eaten for their meat and liver, however smoked elk tongue is considered a delicacy.

There are other large game which are rarely seen in the united states kitchen, yet when they do appear they are treated as same as the venison.

Hare though belonging to the family as rabbits, are gamier. They are also larger. Their flesh is darker and has a strong flavour. European hare and the blue mountain hare are very popular in nature. European young hare need not to be hung and can be roasted. The older animals, two years or older, should be hung and the meat made into casseroles, stews and pates.

PREPARATION TIPS FOR ALL GAME

Game meat, as a rule responds best to roasting. Young game birds, in particular, should be roasted, and traditionally are left unstuffed. In practice, however large birds can be stuffed with seasoned ground beef. This will help keep the flesh moist. Older tougher games can be cooked in a casserole. Marinating game meat in a mixture of oil, vinegar, wine or beer with herbs and spices will help make tough meat tender and enhance the flavour.

Game meat should be refrigerator, like other meats. If it is uncooked, cover or wrap tightly. For the best flavour, use the meat within three to four days. Deer and birds must be hung before freezing. No amount of hanging after they have been frozen will help.