Here in this article we will discuss detailed 17 Course of French Classical Menu and their servings.

The first course of French Classical Menu to be served at a meal This course is usually composed of dishes of salty, tangy taste and light texture to stimulated die appetite. The term hors d’ oeuvre usually apply to the variety of dishes offered such as cold salad, chicken salad. anchovies (a fish belonging to the family of herring), potato salad, sardine, smoked salmon. The presentation of a hors’ d oeuvre is very important. It should always look decorated. Thcre are two main types of hors’d oeuvres :- Cold and hot. Cold hors’d oeuvre includes the following: – Fish or sea food which can be either marinated. smoked in oil or in vinegar ‘Vegetables a la grecque ; various types of charcutiere ; fish roes ; various raw vegetables stuffed or jellied eggs, mixed salad; stuffed grape fruit, prawn cock tail etc. Hors’d oeuvre dishes are small and usually oblong or rectangle.

Cold preparation like salamis and ham are also served. A single item or more can be served from the above list before service of the next course. Beside the same, fruit juice, fruit cocktails certain var ieties of seafood like oysters, snails are also served. Hot hors’d oeuvres includes vols- ou-venh croquettes, rissoles, kromeskies. fritters, fritots.

Pample mousse ( Grapefruit)- This is a citrus fruit served

Cover- in a deep plate on a bed of crushed ice, above a cloth napkin on a large plate, one oyster fork or fish fork at an angel of 45° to the cover from the edge of the table on the right hand side.

– there are 4 common varieties

– These are roe of sturgeon

Grainy caviar can be further classified into-

It is sold in weight basis. Almas is the costliest among all the caviars which costs 23000 dollar per kg.

Cover- Caviar Knife/ Fish Knife on the right side of the cover, caviar pot on a bed of crushed ice in a caviar plate

Corn on the cob (Mais naturel)

The dishes are rich in starch (carbohydrates) served as 4TH course of French Classical Menu Eg.

Durum wheat which is grown in Italy, Mediterranean, the Middle East Prussia, North and South America. It is hard wheat high in gluten, which is ground into semolina

Varieties of Pasta: – Most Pastas come from Italy and can be divided into four broad groups.

Cannelloni and ravioli are the commonest form but the other types of filled pasta include tortellini and tortellioni.

Fish being a lighter item prepare the palate for other dishes. Served as 5th course of French Classical Menu

In a grand dinner entree is either served in a hot dish or a cold dish. Mixed entrees are composite dishes such as croustades, timbales and small pale’s. Today they include, fish, shellfish ,caviar, foie gras, fish terrine pasta dishes (such as gnocchi, macaroni, spaghetti and ravioli) knenelles, savoury pastries, egg dishes and even vegetables dishes.

Dish following the fish course is called entree which in English is entrance. This is usually the first meat dish and it is generally complete in itself served from the kitchen with appropriate garnish and accompaniment Cutlery used is small knife, small fork and a half plate eg. lamb chops, cutlets. Its Served as 6th course of French Classical Menu

Italian “sorbetto” derived from Turkish “chorbef” and Arab “sharabs” which simply meant drink. Sorbet were originally made from fruit, honey, aromatic substances and snow. Sorbet is served in sundae glasses or tall glasses. They are sometimes sprinkled with a liqueur or alcohol to match

their flavor (vodka or lime, dear spirit on appropriate tin it) other ingredients such as raisin pine nuts etc can be incorporated into the mixer before freezing. In case of 12 courses classical* menu it is served after releves but in case of 17 course French menu it is served before releve. This is actually a rest between the courses and it counter acts the effect the dishes already consumed. In this course flavored ice and snow is served in a goblet or tumbler on an undcr plate with a tea spoon. Cigarettes are smoked at this stage preferably Turkish Russian, and Egyptian. Its Served as 7th course of French Classical Menu

Also known as joints, saddle of mutton, leg of lamb, ribs of beef braised, boiled etc and served with potato and at least two other vegetables as an accompaniment. This is actually die main source of die menu, hi Indian style meat curry, korma kadai makhni are served with rice, chapaties, naan, pulao, kulcha, dal, pap ad. raita. achar, as an accompaniment. The silver used are large knife and large lork with a large plate. When rice is on menu a dessert spoon and finger bowl is provided. Served as 8th course of French Classical Menu

Roti is a French word for a piece of meat or fish cooked directly in front of the fire. In theory roti was applied only to meat where as rot would mean any of die dishes served in the great houses after entree, which might or might not contain meat. This course signifies poultry or game, chiken. patridge. turkey, duck, pheasant, goose etc which are roasted, braised and accompanied by a suitable sauce. In Indian cuisine tandoor can be served. A nicely dressed salad, which can also be served as an accompaniment. Served as 9th course of French Classical Menu

A cold dish of various mixtures of raw or cooked vegetables, usually seasoned with oil, vinegar, or other dressing and sometimes accompanied by meat, fish, or other ingredients. Served as 11th course of French Classical Menu

Cold items are served in this course. Served as 12th course of French Classical Menu

Fruits and nuts are served in fruit basket or stand. Served as 16th course of French Classical Menu

Exception- Raisins Frais (grapes) – half plate, Grape scissors, bowl of water to rinse the grapes, doily, under liner (quarter plate) for the bowl and scissor and finger bowl.

This is the last course in which coffee is served in demi-tasse. The service portion is 94.7ml and Served as 17th course of French Classical Menu

CHASING- An alternative sip of coffee and alcoholic beverage is taken

LACING- Coffee is laced with alcoholic beverage and sipped 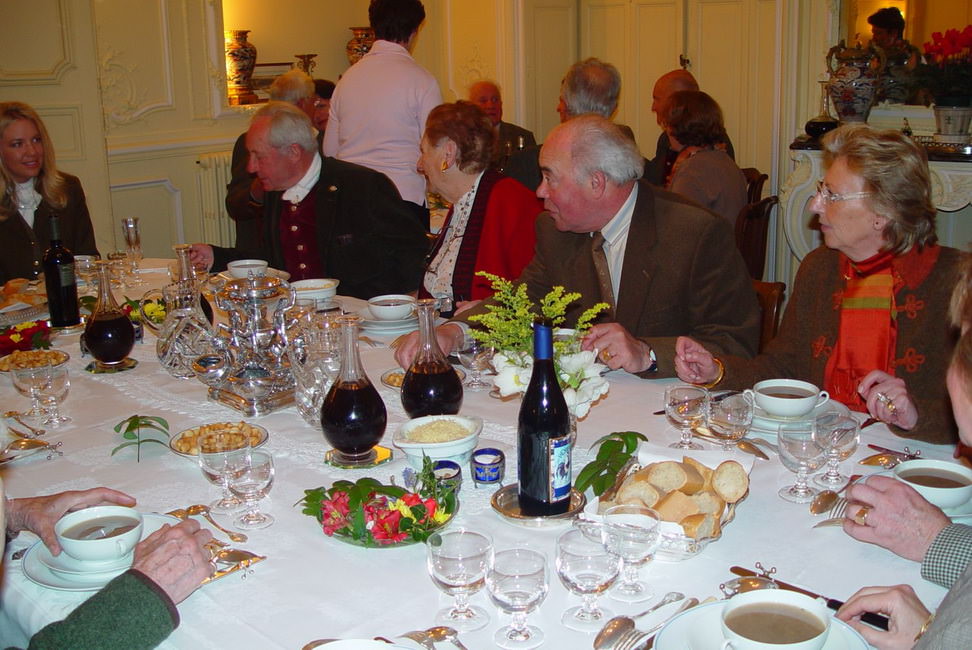