There are many forms of pasta, most of which can categorized as Italian-style or Oriental. Italian-style pasta is primarily wheat-based. Oriental pasta made from variety of flours and starch and they often take the forms of long strip. 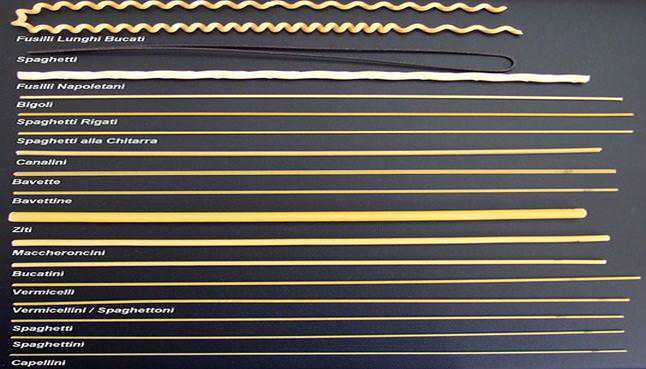 This type of pastas made from ‘Durum-wheat’ flour, water and eggs, herbs, vegetable puree, flavoring; is shaped in various types and can be flavored. It sold in dried and fresh form. The Durum wheat is grown in Italy and the Mediterranean, the Middle East, Russia, North and South America. It is hard wheat, high in gluten, which is ground into ‘semolina’. British semolina is coarse not suitable for pastas. Pasta-flour is milled in fine degree. The term ‘semolina’ is often used to describe pasta-flour, it refers to the type of wheat is used.

The term ‘Italian-style’ used, because it is made in other countries. For example noodles are similar tagliatelle are prepared throughout the Europe, and filled pastas resembling Italian ravioli or tortellini are popular in Eastern European countries. Polish uska are little filled pears pastas traditionally serves with beetroot soup and varenyaki semi-circular dumplings from Russia. 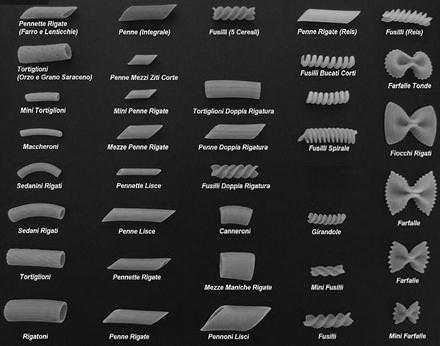 It is a popular belief that the 14th-century explorer Marco Polo introduced pastas into Italy from China, but the first known pastas was made in Sicily in the middle age. It had been a basic food in Italy for many years. Although become very popular in throughout France. Until the early 20th century, macaroni and vermicelli ware the pastas most commonly used in France, mainly to prepare timbale, gratins and sweet desserts and garnish of soups. After 1840 pastas ware manufactured in industrial scale.

There are hundreds of different shapes of dried pastas, but they can group in two types: (I) flat pastas are made industrially by rolling the dough between roller into thin sheets, which can cut into different shape with suitable machine. The shape includes rectangle, square with straight or wavy edges and flat ribbons of various widths. (II) Cylindrical forms of pastas made by extruding the dough or forcing it through pierced plate. The hole through which the dough is forced may be straight, curved, notched or fluted to produce solid or hollow tubes of various size and shape. Drying is an important part and care must be taken to ensure that the pastas will mature and keep well.

Fresh pastas are also a same type of product that has not been dried. It must, however, be consume within few days.

Cooking and Serving of Pasta:

Even when cooking of small quantity of pasta, a large pan must be used because plenty of boiling water is needed for 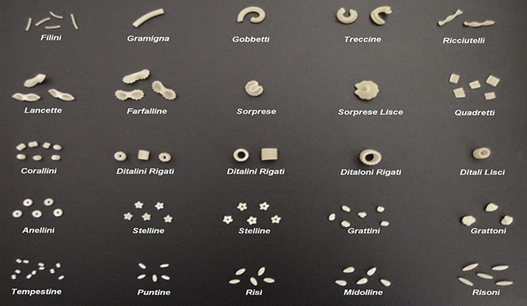 pasta to swell and move freely. Otherwise the released starch makes it sticky. Teaspoon full oil added to the water can help prevent this. Sprinkle small pasta to the briskly boiling water. Long pasta is gradually pushed into boiling water (without breaking the strands), until it soft and bends. It is by ‘sealing’ the pasta in fast-boiling water in this way that one obtains the degree of cooking known as “al dente”.

The cooking time depends on the quantity of pasta, its size and hardness of water. The cooking time also indicated on the packet, it is advisable to test the pasta early to avoid overcooking. Dried vermicelli takes 4-5 min, flat pasta like spaghetti take 10-12min, large macaroni take 15min. Fresh pasta cook quickly and may need 2-3 min.

If the pastas serves as salad, drained, rinse in cold water and mix-up with some oil to prevent sticking. When serve hot, the chosen sauce should be poured boiling hot on the hot pasta; stir quickly and serve with grated cheese. If necessary, rest of the sauce served separately. 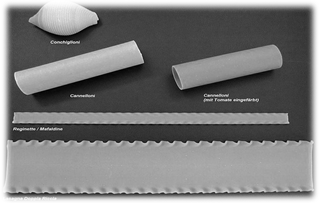 Noodles are the predominant type, but similar types of dough filled to make bite-sized dumplings served dim sum. Chinese dumpling may be filled with meat, prawn or combination of both. Stemming is the usual cooking method, which are often served with a dipping sauce. Pot strikers are slightly larger dumplings cooked first by pan frying then stemming.

Wontons are small filled squares of wheat -flour dough made with egg. A tiny portion of full-flavored filling is pinched into the middle of the dough, and then the corners are free, making tiny bundles.