Components and their Contribution to Bread Making

Bread is composed of various ingredients, each playing a particular role and contributing to the flavour and texture of the finished product. To be familiar and understand these ingredients is the first step in good bread making.

It is a tiny living fungus that thrives on sweetness, warmth and moisture. Through the process of fermentation yeast acts on carbohydrates and turns them into carbon dioxide and alcohol. This carbon dioxide causes the rise in baked products. Alcohol evaporates during baking yet helps in development of flavour in the bread.

The main ingredient in any bread is flour, which gives it its structure. Wheat flour, with its rich protein called gluten, gives doughs their strength and elasticity. Gluten is capable of expanding greatly; thus creating a network of little pockets that trap the gasses produced by yeast that would otherwise escape. As discussed earlier, whole-wheat flour contains all of the wheat grain; i.e. bran, germ and endosperm. All-purpose flour contains only the endosperm, which yields the highest percentage of gluten. Bread recipes that use yeast must contain at least some white or whole-wheat flour to provide gluten.

It is the liquid in the dough that turns into steam during baking. This steam helps create texture in the bread. Water, milk or even beer can be used in bread making. The difference in breads will stem form the components within the liquid. Milk will produce richer bread with a tender crust and a less grainy taste. The proportion of liquids to flour will vary from formula to formula and is caused by the composition of the flour used and the liquid.

It has three primary functions in bread dough, the first being improvement of the bread’s flavour and enhancement of the flavours of other ingredients. The second function is that it has an inhibiting effect on yeast fermentation. Salt reduces the gassing power of yeast, allowing the development of a uniform rise in the product. The third function is the strengthening and tightening of gluten in the dough. Thus salt, when used, should be in balance with the flour or results could be disastrous.

This makes the dough rise quickly as well as helps brown the crust. Sugar should be used sparingly as too much will inhibit the action of yeast. Always follow the formula carefully. Granulated sugar is most commonly used, though other sweeteners like honey, molasses, corn syrup or brown sugar as well as raisins and dates can be used. They all add a different variety of flavour, texture and colour to the bread.

It is often added to enrich bread, however it is not essential to any bread formula. Shortening gives flavour to the bread and makes it tender. Breads also keep longer and better. Shortening also must be used in limit as too much could inhibit the growth of yeast. In olden days hog lard was used in bread making, but today the preferred fats are vegetable shortening and butter.

Eggs too are an optional ingredient in bread making. They provide richness, flavour and improve texture. Breads also have a longer shelf life is eggs are added to the dough. Eggs are best used in the production of sweet enriched doughs.

Spices, dry fruits, nuts and various seeds and cereals are also used in bread dough. They contribute to flavour, texture and nutritional value of the bread.

There are many formulae for bread doughs. Some of these contain few or more enriching ingredients. Those that are low in fat and sugar are termed as lean doughs. They include hard crusted breads like French bread, Kaiser Rolls, and pizza bases. Dinner rolls and white bread are slightly enriched because they have a certain amount of sugar, milk and eggs added to the dough. These breads have a softer crust. Whole wheat and rye breads are made from lean doughs.

Dough that has a high percentage of enriching ingredients such as eggs, butter, sugar, fat and cream are termed as rich doughs. These include rich dinner rolls, brioche, sweet rolls, coffeecakes, Danish pastry, croissants and many tea rolls. They are usually made with a sweet filling or topping.

Steps in Making Bread/Stages in Kneading

All the ingredients are distributed throughout the dough.

Gluten takes on water and starts to become sticky. On further kneading, it absorbs all the liquid and the dough becomes smooth.

The dough becomes smooth, stops sticking and is soft. At his stage fat is added and kneaded in to form a smooth soft dough free from cracks.

Yeast present in the dough is activated and starts to act on sugars and starches in the dough, producing carbon dioxide and alcohol.

After the dough has fermented to nearly double its original size, it is punched with the fist or palm. This expels the carbon dioxide, redistributes the yeast for further growth .

The dough is divided into pieces with a dough cutter as pulling and stretching disturbs the gluten strands and texture will be affected. Each piece is weighed and allowances are made for baking loss i.e. the dough is weighed a little over-weight to compensate for the moisture that will evaporate during baking. The dough pieces are rounded into small smooth balls that make moulding easier.

The dough is allowed to rest for 10-15 minutes. This allows the gluten to relax to make moulding more easier. Fermentation continues during this time.

The dough is shaped into loaves and rolls and placed on pans or baking trays. Pressure must be used when moulding to prevent uneven air pockets. For loaves and rolls, the seam must be centred on the bottom to prevent splitting during baking.

After the dough has acquired the required volume during proofing, it is placed in a hot oven. The temperature inside the dough gets higher due to the high temperature of the oven and thus the gasses trapped inside expand causing oven spring, which is a sudden change in volume of the product. Moisture from the surface of the dough evaporates, bringing about baking loss. Fat melts and lubricates the gluten and is finally absorbed by starch. Proteins and starches coagulate and gelatinise and the product becomes firm and holds its shape. Sugar on the crust caramelises imparting a golden colour to the crust.

Oven temperatures must be adjusted for the product being baked. Rolls spaced apart are baked at a higher temperature than large loaves, so that they brown in the time it takes to bake them. Rich and sweet doughs are baked at a lower temperature because their high content of enriching ingredients browns the crust too fast. Hard crusted breads are baked with steam injected into the oven at the beginning. This aids in the formation of a thin crisp crust. A break on the side of the loaf or roll is caused due to under-proofing of the product before baking. It is also caused by continued rising after the crust is formed. To allow this final expansion, hard crusted breads are slashed or scored before baking. Small rolls are not usually scored. Baking times vary depending on the product. A golden crust colour is usually a sign of doneness and loaves should sound hollow when thumped, if they are done. 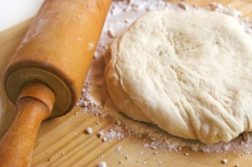 In this method, yeast is dissolved with a portion of the liquid. The rest of the ingredients, except flour, are combined with the remainder of the water and mixed. The flour and yeast solution is added and the dough kneaded until it is smooth. Shortening is kneaded in last. Fermentation is longer in this type of dough as yeast is less.

In this method, all the ingredients are mixed in a once and the dough is used immediately. Yeast is more and the fermentation period is eliminated.

Here a ferment is made with yeast, part of the liquid, sugar and salt. It is kept to ferment and only then is the rest of the flour and liquid added.

Similar to sponge dough method, only fat and sugar content is higher.

This is a variation of the straight dough method. Salt is added only after 2/3 of the fermentation time is over. Yeast multiplies at a faster before being inhibited by salt. Therefore, fermentation is faster.

Left over dough is kept until it over- ferments and turns sour. This is added to the new dough and acts as a partial substitute for yeast. It provides a distinct flavour to the bread.

The temperature of the dough is maintained at 88ºF by using lukewarm water. This is done when there is shortage of time and fermentation has to be done faster. The quality of the bread made by this method is not so good.

This is a machine method of making bread. A liquid broth of yeast, water, sugar, milk solids, salt and yeast food is prepared in steel tanks by mechanical agitators. The temperature of the broth is maintained at 86ºF. After the broth is fermented, it is pumped into an incorporator where flour and fat are roughly mixed in. It then moves on to the developers where gluten is developed by high speed mixing. It then goes on to dividers where the dough is measured, cut out and moulded. It is then placed on greased trays ready to proof and bake.

1)Too dense or close grained: too little yeast, under-proofed, too much salt, too little liquid.
2)Too coarse or open: too much yeast or liquid, incorrect mixing time, improper fermentation, over proofed, pans too large.
3)Streaked crumb: improper mixing procedure, poor moulding or make up techniques, too much flour used for dusting.
4)Poor texture or crumbly: fermentation time too long or too short, over-proofed, oven temperature too low, flour too weak, too little salt.